A day in Rapperswil-Jona and Ufenau on Lake Zurich 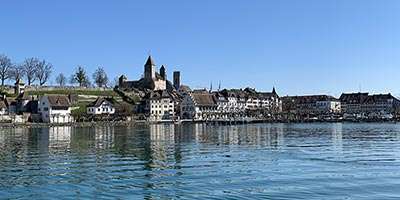 A day in Rapperswil-Jona and Ufenau on Lake Zurich

The city of roses Rapperswil-Jona is a charming town in the Canton of St. Gallen, on Lake Zurich. With its old town center, green islands on the lake and a very special wooden pedestrian bridge, the city and the surrounding region offer many opportunities for leisure and many places to discover, both in summer and winter. Moreover, the area is perfect for a spring or summer weekend, when the weather is pleasant, the lake is fully enjoyable and the famous rose garden is blooming. We were here on a bright April day and in this article we tell you about our visit and give you some useful tips for your stay. 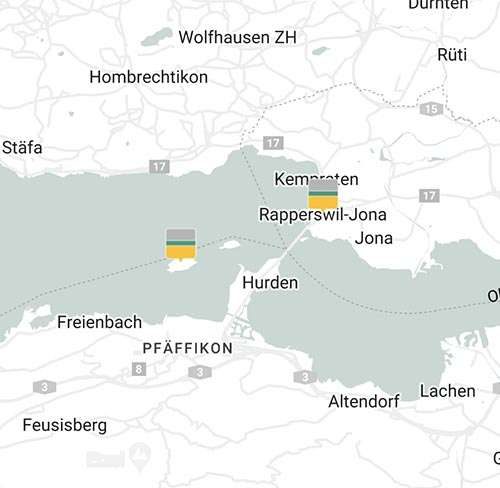 Rapperswil is an old medieval town in the Canton of St. Gallen, on Lake Zurich. The town is commonly known as “Rapperswil-Jona” since the two neighboring towns of Rapperswil and Jona were administratively merged into one entity in 2007. However, most visitors who come here focus their attention and time on the small Rapperswil, a town with an old heart and an interesting medieval historic center. However, the whole area around the town offers many options for sports and outdoor activities lovers both during summer and winter. We were here last spring, with the aim of getting to know this area by visiting the city and the small island of Ufenau, which is located in Lake Zurich just in front of the town and is easily accessible by boat. In this article we tell you about our visit and give you some useful tips for your stay.

Previous
Next
How to get there 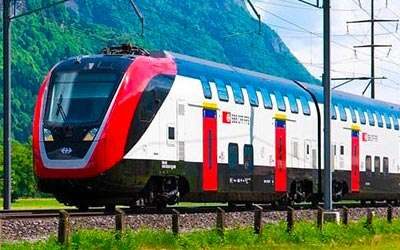 See the location in Google Maps.

Rapperswil is easily accessible by train from the main cities in Switzerland. From Lucerne, a direct train to St. Gallen will take you to Rapperswil in about one hour and twenty minutes. Of course, also Zurich is served by direct and regular trains, which reach the city in about 40 minutes. Travelers coming from Bern, Basel and Geneva, will have to change trains in Zurich. Lastly, from Lugano the trip takes about 2 hours, with a change in Arth-Goldau. Once in town, the Rapperswil train station is located on the lakeshore, just a short walk from the old town, which is easily accessible in just 5 minutes.
It is possible to check the purchase options and buy tickets through the SBB website or the SBB App, which we recommend you use anyway to check timetables and operation of the lines. 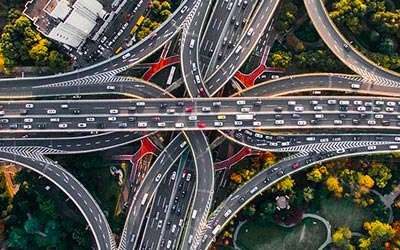 See the location in Google Maps.
Rapperswil can of course also be reached by car via the A3 highway that connects Zurich to Chur and which you will therefore have to reach from your departure place. In order to protect the quality of life of its citizens, since many years Rapperswil has decided to close its historic center to cars and to be focused on public transport. Therefore, when you arrive in the city, you will have to leave your car in one of the many parking options available in the area of the bus and train station. At this link (in german) you can find all the information about the city parking lots and their costs. We reach Rapperswil on a sunny Sunday in mid-April. As always, to get here we choose public transportation and specifically a direct train that takes us from Lucerne to the city in about an hour and a half. To be honest, the train ride is in itself an experience worth trying, both because of the beauty of the area around Lake Zurich and because of the particular route that the train line follows which, at a certain point, crosses the lake on a narrow embankment. Upon arrival, we are greeted by a lively and dynamic city – despite it being Sunday morning – and a peaceful lakefront. Strolling here is really pleasant! So we decide to start right from here, from the lake, our itinerary in the historic center. We suggest you do the same and don’t miss the opportunity to visit the heart of the city and stroll through its fascinating alleys. However, at the same time, we suggest you include these must-see attractions in your itinerary:

– Schloss Rapperswil: the city’s castle is definitely fascinating and you will not be able to miss it, as it dominates the city and characterizes its skyline. Built between 1200 and 1300, the building stands on a hill in the center of the city and is worth a visit for the magnificent view it offers over the old town, Lake Zurich and the mountains that surround the area. Walking towards the entrance of the castle, take a few minutes to look at the two sides of the hill on which it stands: while on the southern side you will find the oldest vineyard of Lake Zurich, still productive today, on the opposite side you can see the deers that, since 1871, live in this area, protected and photographed as real celebrities. The Deer Park, which recently turned 150 years old, finds its origin in the legend that tells about the birth of the city. The legend says that during a day’s hunting on the shores of the lake, Rudolf, Count of Altendorf, and his wife, Countess Mechthild, came across a deer and chased it to a cave on Sonnenfelsen, today’s castle hill, but decided in the end to mercifully spare its life. The legend also tells that, shortly after that event, the same deer appeared in a dream to the Countess, laying her head on her lap as a sign of gratitude. Therefore the Count, interpreting this event as a divine sign, decided to build a castle on the hill and a city just below it.

– Hauptplaz: it is the heart of the city, the main square of the old town and hosts the weekly market. The square dates back to the 14th century and features a picturesque fountain and an impressive staircase leading up to the castle. Here you will also find the historic Town Hall building and many restaurants, cafes and small stores to discover.

– St. Johann Catholic Church: also located in the heart of the city, not far from the castle, its oldest core dates back to the thirteenth century, but the ancient church, after a devastating fire, was rebuilt and re-consecrated in 1885. It is definitely worth a visit because it is very characteristic, with its strange combination of styles. However, don’t just visit the main church, but also make a short visit to the small Liebfrauenkapelle, the cemetery chapel right next to the main church.

– Rose Gardens: Rapperswil is known as the city of roses, flowers that are present not only in the city’s emblem but everywhere in the city. You can see them in their beauty between May and November a bit ‘everywhere, but the best way to see them is certainly a visit to the Rosengarten which is located near the Capuchin Monastery, near the municipal vineyards.

After the tour of the center, we decide to take the boat and go to visit the small island Ufenau, just a few minutes by boat from the city. This small island, easily accessible from April to October, has been for a long time property of the Monastery of Einsiedeln and, therefore, not accessible to visitors and tourists. This circumstance has certainly helped to preserve its charm and beauty until the area was declared a protected natural reserve. Today, it is absolutely forbidden to light fires or swim here. However, the island is worth a visit for the beauty of the place, which we suggest you to appreciate walking along the short path that follows the perimeter, and also getting lost in the inland paths, where there are two small and ancient churches that can be visited today: the Church of St. Peter and Paul, dating back to mid 1100, and the Chapel of St. Martin, dating back to the seventh century. For a snack, a lunch or a coffee between the vineyards, here you will also find a good restaurant.

The wooden footbridge between Rapperswil and Hurden

Few people know that Rapperswil is located on the route of the “Camino de Santiago”. That’s why the place was already known and frequented in the Middle Ages. It is said that even in those days a rickety and unstable wooden footbridge made it possible to cross the lake from the town center to the opposite shore at Hurden. Today, the two parts of the lake are connected by a more stable embankment, which is crossed daily by cars and trains. However, in April 2001, the old and rickety wooden footbridge was replaced by a modern and functional one, easily walkable and a great way to end your visit here, perhaps when the sun begins to set. We chose to walk along the footbridge to Hurden and, instead of heading back into town, continue on foot along the hiking trail that first runs along the lake and then reaches Pfäffikon. Here you will find a train station where the main train lines run. The entire walk, which you can find at this link, is about 4.5 km long and takes about an hour. If instead you decide to walk only the 1 km stretch on the bridge, you will need only 20 minutes.

For an easier visit, at this link you will find a handy pdf-map with the main attractions of the city.

To keep your travel costs down for trains and boats, you can check the SBB website for day tickets, which will allow you to move freely on most of the Swiss transport network at great prices!

Are you planning a visit to Rapperswil and Ufenau and have any doubts or questions? Let us know by leaving a comment below and we’ll get back to you as soon as possible!

* Advertising note: this article contains affiliate links from our partners. Through affiliations, we give you the opportunity to access promotions and offers, often in advance or exclusively, for the purchase of products and services. At the same time, if you choose to buy from one of our partners, you will support our blog and help us to keep it open. Our opinions about the recommended products or our purchase advices are not influenced by the partnerships. If you want to know more about the way we handle advertising on this blog, you can visit this page. 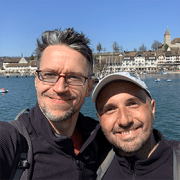 Hi! We are Alessandro and Michele but for friends we are the “PerSpa Family”: as simple as that! We met each other in 2006 for a strange twist of fate and we have never separated since. In a few words, we are a family. We are Italian, but two years ago we moved and now Luzern, in Switzerland, is the place we call “home”. We like hiking and travelling with a pinch of Dolce Vita and we want to share our passions with you!
If you want to learn more about us, you can read our story here.

You can read also 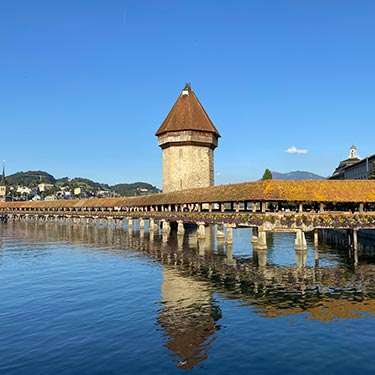 Lucerne, the city of lights in the heart of Switzerland 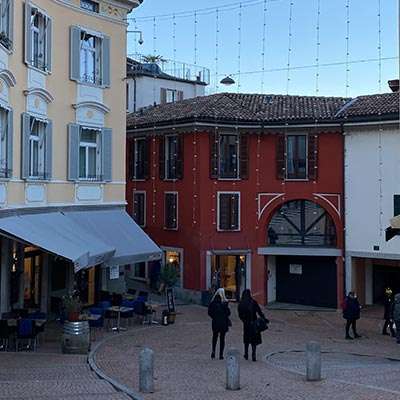 Lugano, a Christmas with a Mediterranean heart 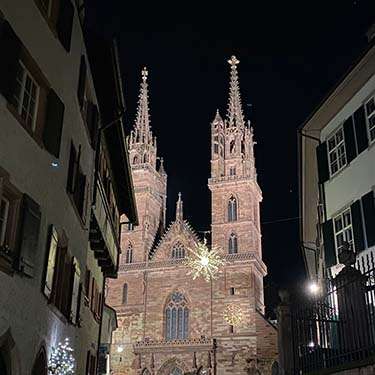 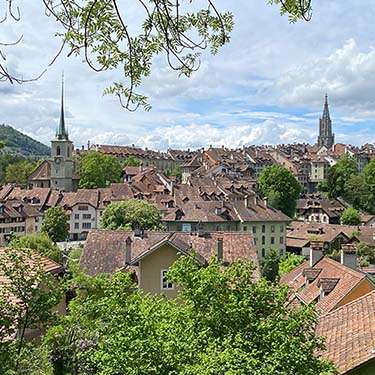 Bern, a weekend in the city of bears

By receiving our newsletter you will be informed about our travels and hikes and will receive our tips directly in your mailbox!

Isn’t it enough? Here you can discover 6 more good reasons for subscribing to our newsletter!